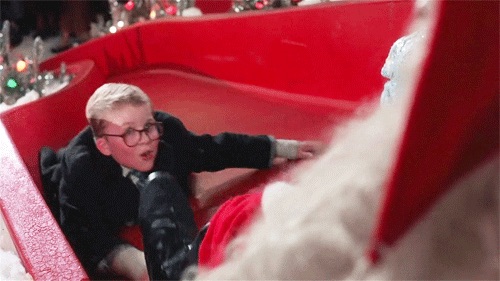 1-Macy’s parade Santa Claus was fired and replaced by Kris Kringle after he drank too much and got tangled up in his whip. The original Miracle on 34th Street was made in 1947, long before we had an Americans with Disabilities Act. If Macy’s had a parade Santa today who showed up drunk, what should it do? Assume Santa is an alcoholic. As we all know, alcoholism is an ADA-protected disability.

C. Make reasonable accommodations for Santa's disability by providing him with a thermos full of hot buttered rum while he rides in the parade.

D. Don't give Santa any more to drink, but unwind him from his whip and let him stay in the parade as a reasonable accommodation. He'll sober up by the time he gets to his castle.

ANSWER: A. Even though alcoholism is an ADA-protected disability, an employer is not required to tolerate drunkenness on the job as a reasonable accommodation.

2-If Bob Cratchit were performing clerical duties for Scrooge and Marley in modern-day America, would he be FLSA-exempt, or FLSA-non-exempt?

A. Exempt, because he receives a salary and is very professional. Overtime? Bah humbug!

ANSWER: B. Sorry, Scrooges. Bob is non-exempt. Even if he gets a salary and acts professional.

3-Everyone knows that Santa travels around the world delivering toys and goodies to little children on Christmas night. Assuming his round-the-world trip takes 24 hours, and assuming U.S. wage and hour laws apply, how should his elves be paid?

A. The 8-and-80 rule applies in this situation. The elves would get straight time for 8 hours and overtime for 16 hours. Then, for the two-week pay period, they'd get overtime for any hours in excess of 80.

B. Straight time for all hours worked, except for the hours that they're flying over California, which has daily overtime. And, of course, if their total hours for the workweek exceeded 40, then they'd get overtime for those extra hours. Oh, and when they cross the International Date Line, it'll be tomorrow, so they'll get an extra 24 hours' pay, so, yeah, they definitely get overtime.

C. All 24 hours are non-compensable travel time under the Portal-to-Portal Act.

D. Nothing. The elves are done working on Christmas Eve. They're at home sleeping while Santa and his reindeer deliver presents.

4-Santa’s helpers at Higbee’s department store willfully and wantonly, and with malice, pushed Ralphie down a slide. If Ralphie had been seriously injured, under what circumstances would the store (as opposed to Santa’s helpers) be liable for his injuries?

A. Never. Santa's helpers were independent contractors, not employees. Higbee's has no responsibility for their bad behavior.

B. Always. Santa's helpers were acting within the course and scope of their employment with Higbee's when they shoved poor Ralphie down the slide.

C. Higbee's is legally responsible if it ratified the behavior of the helpers -- for example, by taking no action against them after learning of their intentionally tortious conduct.

D. Always. A Santa slide is a dangerous instrumentality which requires a higher duty of care.

ANSWER: C is the best answer. For B to apply (respondeat superior), the helpers would have to be employees of Higbee's, and Ralphie's injuries would have to have been caused by the helpers' negligence rather than intentional misconduct.

5-Is a very shiny nose -- so shiny you could even say it glows -- a “disability” within the meaning of the Americans with Disabilities Act?

A. Of course not. This is the dumbest quiz. Robin must have started hitting the eggnog early.

B. Yes. A big shiny nose substantially limits one in the major life activity of sniffling.

C. Not unless and until Rudolph asks for a reasonable accommodation.

D. Yes. Even though the shiny nose did not substantially limit Rudolph in an ADA-recognized major life activity (or major bodily function), all of the other reindeer "regarded" him as having a disability. Therefore, it's a disability.

ANSWER: D, in all likelihood. And Rudolph has one heck of a perceived disability-harassment claim against those other reindeer (Santa, too, if Santa knew or had reason to know of the harassment).

6-If an employer plays “Baby, It’s Cold Outside” at a 2018 workplace holiday party, is that sexual harassment? (Hat tip to my law partner Bill McMahon)

A. Not unless that guy talks that lady into staying for one more drink.

C. None of the above.

ANSWER: C. Wet blanket lawyer that I am, I wouldn't recommend playing "Baby, It's Cold Outside" at a workplace party after this year's brouhaha about it. But doing so wouldn't be sexual harassment. At least, I don't think so. Would it?

7-Does the Grinch remind you of anyone you work with?

C. Nobody at work, but I do have this curmudgeonly uncle . . .

ANSWER: There is no right or wrong answer to this one, so everybody gets a point. Merry Christmas!

4-5 correct: You've been good, for goodness' sake! Santa Claus is definitely coming to your town.

2-3 correct: So-so. You can have some folderol, and gifts that matter not at all.

1 correct: You're gettin' nuttin' for Christmas.

Just kidding! You all did great. Happy holidays!

Drug and alcohol policies in the time of COVID

Not quite "Love in the Time of Cholera", although the cholera and COVID parts do kind of match up, but...

Not content to simply stop at 10 new employment laws and regulations, the state that gives us: Eleven Madison...

Look, I am not one to argue with attorneys because you never know when you might need one, so you...

Religious holidays - what to do, how to do it and a calendar

For those of you who know the holidays and where they fall on the calendar for nine, yes 9, different...