Being at work full time is not an essential function of a job? 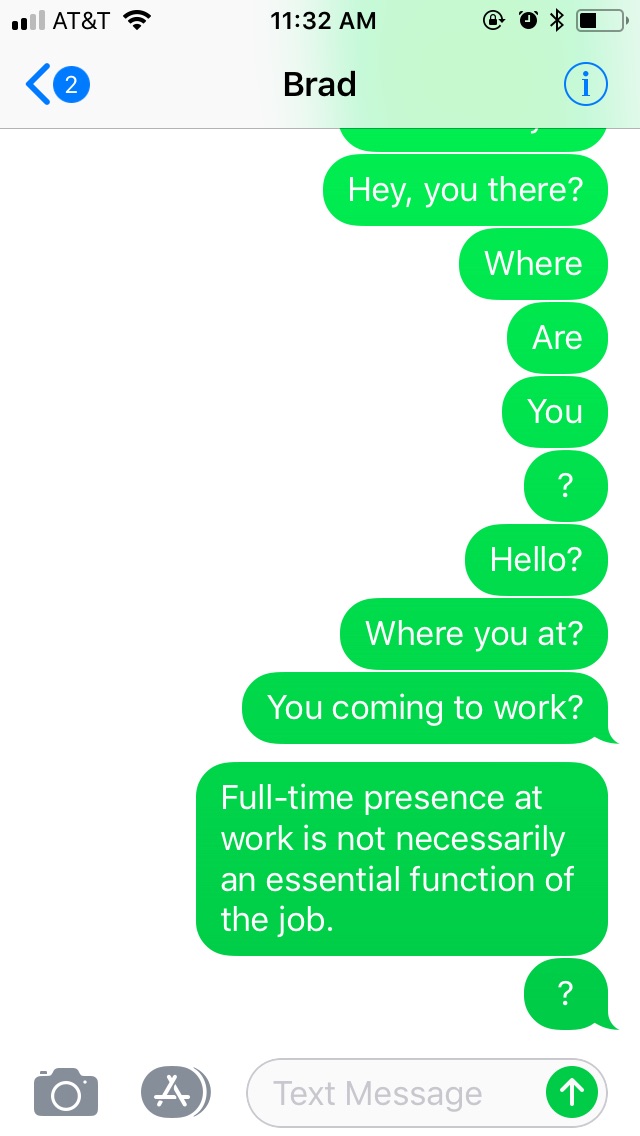 This blog was written by Fiona Ong at Shawe Rosenthal, author of our Maryland Human Resources Manual. You can find the original blog and their Labor & Employment Report newsletter on their website.

Full-Time Presence at Work Is Not Necessarily an Essential Function of the Job?

In a somewhat unsettling decision, the U.S. Court of Appeals for the Sixth Circuit held that “full time presence at work is not an essential function of a job simply because an employer says that it is.” Interestingly, this seems to run counter to the Americans with Disabilities Act regulations, which state that evidence of whether a job function is essential includes, first, “The employer’s judgment as to which functions are essential.”

Facts of the Case

In Hostettler v. College of Wooster, an HR generalist took 12 weeks of maternity leave. Because she suffered from severe postpartum depression and separation anxiety, she requested and received approximately 4 weeks of additional leave and then a part time schedule, working until noon. For the two months following her return to work, the employee contends that she was able to do everything required of her position, even on a part-time schedule. A colleague agreed that the employee was able to complete her work on the modified schedule, and also performed much of her work from home. The employee’s supervisor gave her a positive evaluation at some point during this period.

The employee sought to extend the period of part-time work for several more months, while potentially extending her hours to 2 or 3 p.m. However, she was terminated for being unable to return on a full-time basis. The employee sued, and the trial court dismissed her case, on the basis that full-time work was essential to her position, and she was therefore not qualified for the position.

The Sixth Circuit stated that, “[o]n its own, however, full-time presence at work is not an essential function. An employer must tie time-and-presence requirements to some other job requirement.” Noting that the employer may have preferred full-time presence and that “it may have been more efficient and easier on the department if she were,” the Sixth Circuit went on to state, nonetheless, “those are not the concerns of the ADA.” Rather, employers are required to provide reasonable accommodations, including modified work schedules, and “an employer cannot deny a modified work schedule as unreasonable unless the employer can show why the employee is needed on a full-time schedule.”

The Sixth Circuit also found that the employer had failed to engage in the required interactive process with regard to the employee’s request to extend her modified schedule. Although it was clear that the parties met four times, it was unclear what was discussed during those meetings.

This case offers several important lessons for employers. First, although employers do have the right to define the essential functions of a position, they also need to be able to offer an explanation as to why those functions are essential. Second, employers should be clear about the effect of an employee’s absence on business operations; in this case, it appears that the supervisor may not have fully explained or shared where there were operational impacts. And finally, documentation is critical. In this case, there was no documentation as to the challenges experienced by the employer as a result of the absence, and no documentation as to the interactive process following the employee’s request for an extension of her modified schedule. Accurate, contemporaneous documentation may have resulted in a more favorable outcome for the employer.

Employers are asking what measures should be implemented in response to the Coronavirus – COVID-19 outbreak.  Some are even questioning...

OH: What your workplace can do right now to prepare for COVID-19

Name three things you can do right now to prepare for COVID-19. Michael Karst has four, so just go ahead...